I don’t know about you, but I feel like I need Christmas MORE THAN EVER. So, good thing we’re coming to you a week earlier than usual.
Sidekick’s line-up, like a sparkly Christmas tree, is a thing of beauty. Decking the halls of comedy, we have:

Katharine Ferns
2012 finalist in the Toronto’s Funniest Comedian Contest at Just For Laughs (JFL42)
“Observant and witty, Katharine Ferns is a modern, 21st century woman, who throws herself into life and consequently her jokes.”(Four stars)****TVBOMB
“Salty-sweet, savagely honest, brutally funny.” – The Scene Magazine

Daniel Nicholas
Shortlisted BBC New Comedy Award 2013
His writing displays a sharp, obtuse wit across all his disjointed one-liners…Someone as inventive as this should have a future in comedy. -Steve Bennett, Chortle.
Immensely brave use of Pinter-esque silences…a dangerous comedian who keepsyou on the edge of your seat waiting for the next outrageous non sequitur. –The Western Gazette

And Hosted by Kate McCabe
A goddam delight–manchesterwire

Featuring the Be My Soulmate Quiz wherein you can win a genuine ‘prize’.

All this and more in the faaaaaabulously refurbed upstairs lounge at On Bar on Canal Street. £2 or FREE with student card. 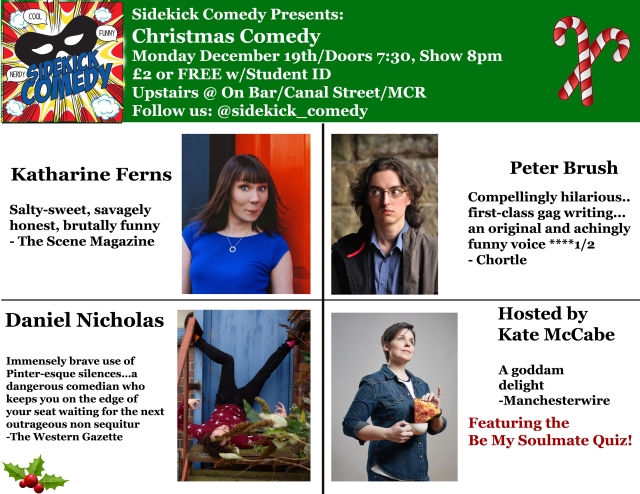